“The people of Israel will no longer trust in Egypt. Instead, Egypt will remind them of how they sinned when they turned to it for help. Then they will know that I am the LORD and King.”

Trust no one or no thing that makes light of Jesus Christ or hinders your vision of Him.

In scripture, Egypt is a type of the WORLD. Egypt was refined and sophisticated. Egypt was wealthy and alluring. Instead of looking to the LORD, the Israelites were constantly turning to Egypt for help. On the surface, it seems like a good idea but Egypt enslaves us to their system, they will conform us to their likeness and in the end, they will disappoint. Egypt will tolerate the people of God and they will use the people of God for their own purposes but they will never love and appreciate the people of God. Yet for some strange reason, every time Israel got in trouble they look to Egypt for salvation.

This very thing happened when Nebuchadnezzar invaded Judah. He deported all of the wealthy people and lift only the very poor in the land. He appointed Gedaliah as governor and he was a very good man, too good for his own good. Nebuzaradan, the commander of Nebuchadnezzar’s army found the prophet Jeremiah in jail, he released Jeremiah and gave him complete freedom to do whatever he wanted. Jeremiah was a good friend with Gedaliah and so he moved to Mizpah to help Gedaliah govern the country. Meanwhile, the refugees {Israelites who had fled to surrounding countries} returned and things seemed to be going well until an evil man names Ishmael showed up and murdered Gedaliah. The Israelites became afraid and made plans to go to Egypt to avoid Nebuchadnezzar’s wrath. Jeremiah protested loudly and without abate but they refused to listen and they forced Jeremiah to go with them to Egypt. Bad idea, Nebuchadnezzar came to Egypt and destroyed it and the Israelites who took asylum there perished including Jeremiah.

Egypt {The World} looks good from a distance but it cannot save. Egypt is not the answer; Jesus is the answer. Do not go to Egypt for help. Do not depend upon this world for security, peace, protection and salvation. This world can not save you nor give you what you really need. Go ahead and horde your resources. Hold the title to your lands but in the end you will be disappointed in this world. Does this world have power of death? Does this world have a cure for cancer? Can this world give you peace? Can the world absolve your sin? Who has power over death, who has a cure for cancer, who can give you peace and who can absolve your sin? JESUS, that’s who, not the world but JESUS. The bottom line: You can have this world, just give me JESUS.

There are some things I want to say about this world and those who put their trust in it that I cannot say. Suffice it to say, I am witnessing the disappointment and disillusion of those who put their trust in Egypt. People whom I love and respect have been enslaved by the culture of Egypt. Money may help but it is not the answer. There is some wisdom in frugality but taken to the extreme, it is foolish. How can you use your wealth today to help someone today? What mission or mission organization are you partnering with? Joe David is about to do something that most of us would not do: how can you partner with him? I will tell you one thing you can do: you can pray. Ignore me, be selfish, hang on to your money and save it for the great fire. You are going to be one sad puppy when you see your life’s work go up in smoke.

Yesterday did not seem like Sunday: I guess it was because I was in the nursery. 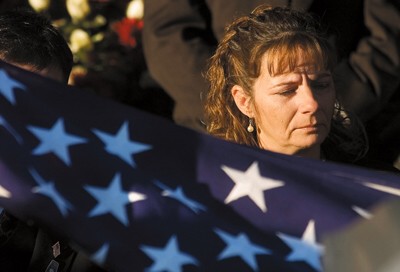 The above is something you never want to see; a grieving mother at the grave of a fallen soldier. We do remember those families who have made the ultimate sacrifice. The family nearest us is that of Jon Erik Loney who was killed by a IED on November 28 2006 while serving in Iraq. Jon was a member of the 1st Battalion, 6th Infantry Regiment, 2nd Brigade Combat Team, 1st Armored Division. He graduated high school at Danville in 2003. He died serving his country at the youthful age of 21. As long as I have a mind I will not let you forget his sacrifice. My father and father in law both served in the Army during WWII but they came home. Memorial is not about picnic and parties; it is about those who didn’t home. I know that war is a necessary evil but even so, I hate it and so much of it is unnecessary. I can’t think of a better example than the civil war. Slavery had no future in the United States but Lincoln couldn’t wait for the process to work itself out, he had to make a name for himself. He did so at the expense of a million Americans, thousands were civilians. All expendable to him and that my friend is the saddest note in American History.

This picture really shakes me up…

LORD remind us: They are more than a name on a wall…